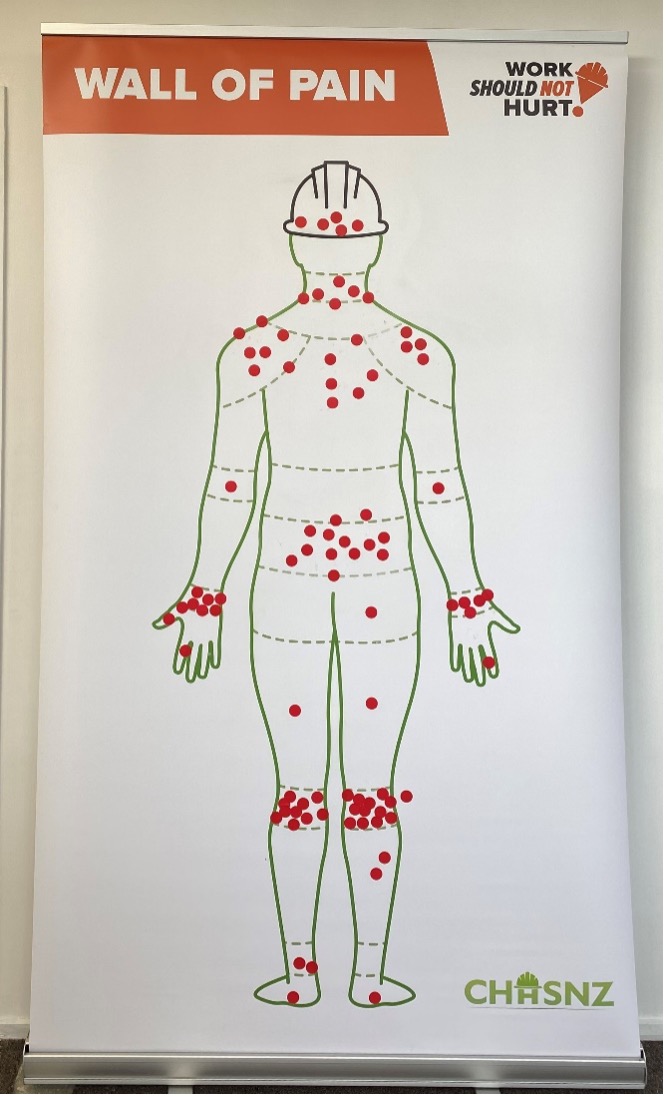 MasterElectricians and the CHASNZ Ergonomics Team surveyed 50 Electricians at the 2022Trade Show and asked them “Do you have any current discomfort, pain or injury?”. Electricians were asked to indicate where on their body theyexperienced the problem by placing a dot on the body part effected.

A staggering 100% of Electricians reported that they had current discomfort, pain or injury. Over 46% of these reports were for knee problems which was the site of most concern regardless of age indicating that this problem may be occurring earlier on in an electricians career. Many report they are managing the condition while still working and several have had surgery and injection.

The prevalence of knee problems are of concern as the only other data source we have is from ACC and they have knees as the fourth most common site for a claim. Knee claims cost the industry around 3000 lost days per year with an average of 29 days off per claim.

In the electrical industry knee problems are influenced by the amount of work completed below the waist or at ground level where bending ,squatting, crawling and  kneeling positions are maintained for long periods of time. The knee is partial to wear and tear when it is fully bent and when there is direct pressure placed on it when kneeling. That said the number of Electricians who had knee pads as part of their everyday kit was low and this will be an area that CHASNZ and Master Electricians will work on together to promote knee protection as basic PPE.

Chris Polaczuk from CHASNZ was surprised at the high incidence of pain amongst Electricians of all ages and stages of their career. “Many sparkies reported more than one site of pain affecting them on a regular basis with most people having developed long term management strategies to continue working. Sadly to some degree pain was viewed as a foregone conclusion to a career in the electrical industry.”

On a positive note many electricians viewed these problems as being preventable. Pete Finegan Health and Safety Advisor for Master Electricians reports “One thing I heard mentioned several times by older sparkies was saying if I knew then whatI know now about the trade I would have far less pain problems which gives us hope that we can pass on these learnings onto our apprentices.”

CHASNZ is working with Master Electricians to address strains and sprains in the industry with their programme ‘Work Should Not Hurt’. We are looking for electricians and companies to participate in our current research projects looking to identify what can be done by electricians to prevent these problems.
If you would like to contribute to this work please contact Chris Polaczuk by emailing chrisp@chasnz.org

For more information go to https://www.chasnz.org/wsnh-trades/electricians